Code's Mill on the Park

Hopetown Day at the MIddleville Museum

Carleton Place is a quick and easy day trip or weekend getaway from Ottawa. After all, you can drive there in about 20 minutes from the Canadian Tire Centre—but it feels as though you’re a million miles from the city hubbub.

Intrigued? Here are 10 things you might not know about this Lanark County town.

It has a Red Baron connection 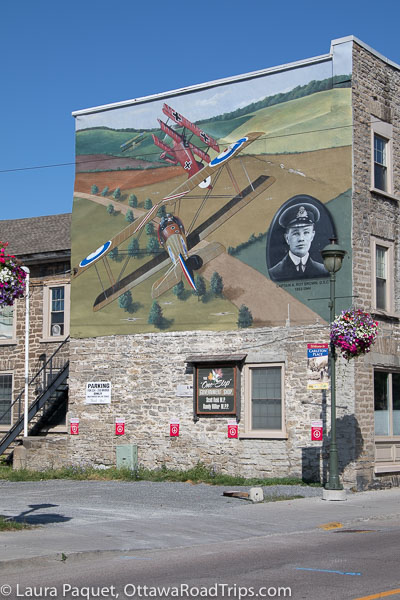 Charles Schultz and Peanuts aside, it wasn’t Snoopy who shot down Manfred von Richthofen, the First World War German fighter pilot better known as the Red Baron. According to the Royal Air Force (RAF), it was actually Canadian Captain Arthur Roy Brown, who was born and raised in Carleton Place. While the source of the bullet that ultimately killed the Red Baron in April 1918 is disputed by historians, it’s indisputable that Brown was among the last Allied airmen to fight him in his final battle—and that the RAF gave Brown official credit for the deed.

The Roy Brown Society has a detailed biography of Brown on its website, and you can see an exhibition about his life inside the visitor centre at 170 Bridge Street. A statue of the flying ace is also planned for a small park just north of the main bridge downtown.

It has a community labyrinth 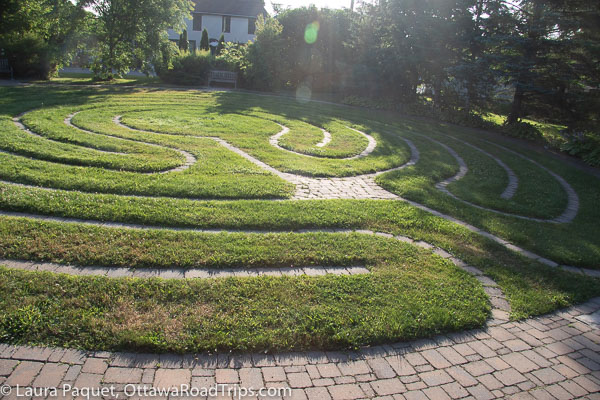 The Carleton Place Community Labyrinth is particularly pretty early in the morning.

I always get mazes and labyrinths mixed up. A maze is a purposely confusing pathway edged with high borders (such as walls or hedges). A labyrinth is a continuous path with no sight-hindering barriers, designed to inspire contemplation. And the Carleton Place Community Labyrinth, on a plot of land behind the Carleton Place and Beckwith Heritage Museum, does exactly that.

I visited it on a recent summer morning around 7am, just as the sun was peeking over nearby trees and flooding the peaceful space with light. I didn’t know what to expect, but I slowly walked along the path, enjoying the fresh morning air and the deep quiet of the surrounding neighbourhood. Then I sat on a stone bench and listened to a meditation recording on my phone, before walking the path again. I can’t explain it, but it really did perk up my day.

A keen community group built the labyrinth and opened it to the public in 2011. It’s open 24 hours a day, free of charge. For information on the site and the events occasionally held there, check out the Carleton Place Community Labyrinth website.

It rents out bikes for $5 a day 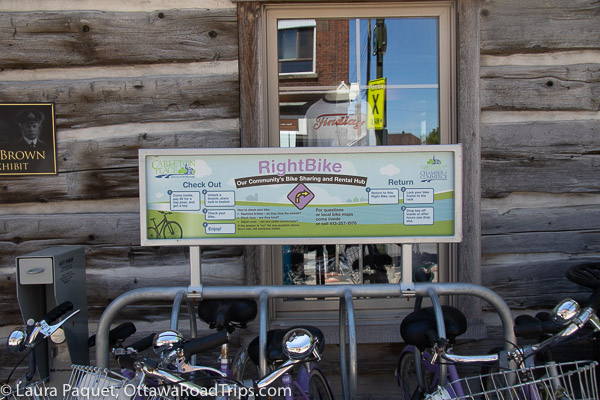 You can rent a bike at the Carleton Place Chamber of Commerce and Information Centre on Bridge Street.

Don’t feel like hooking a bike rack to your car? No worries; the chamber of commerce rents out bikes from its downtown office for $5 a day. It’s advisable to call ahead to reserve. At the office or online, you can also get a free local cycling map.

It has a food tour 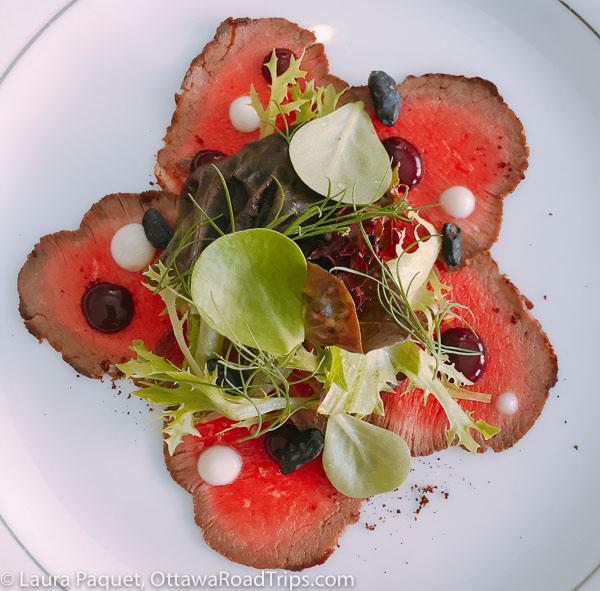 The beef carpaccio at Black Tartan Kitchen was one of the highlights of my Good Food Tour in Carleton Place.

As I’ve written about elsewhere on this site, the Good Food Tour offers fun culinary walking tours in Carleton Place. (It also runs tours in nearby Almonte.)

It was named for a square in Glasgow

For years, I assumed that Carleton Place was named after Sir Guy Carleton, the 18th-century Quebec governor immortalized in schools and communities across the land (including my alma mater, Carleton University). However, that isn’t the case. Instead, its name is a corruption of Carlton Place, a 19th-century square in Glasgow, Scotland—according to the Town of Carleton Place website.

It holds an annual sheep festival 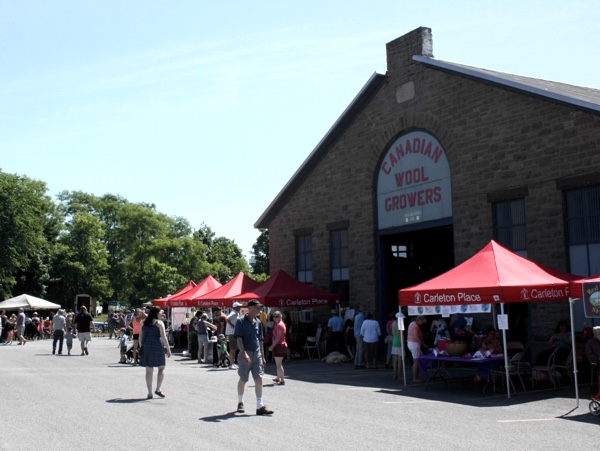 Photo courtesy of the Lambs Down Park Festival.

Carleton Place is home to Canadian Co-operative Wool Growers Limited, a national organization of sheep farmers and the country’s largest distributor of lambs’ wool. Each June, it hosts the Lambs Down Park Festival on its Carleton Place property, featuring live music, pony rides, sheep shearing demonstrations and all sorts of other farm fun. Also on the property is the Real Wool Shop, where you can buy wool, cotton, bamboo and other natural-fibre clothing and products, year round.

It’s on the Mississippi River 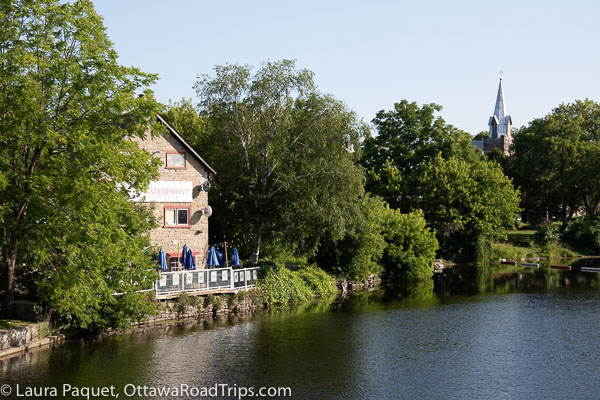 The Mississippi River in Carleton Place, taken from the Central Bridge.

No, not that Mississippi River. As far as I know, Huckleberry Finn never made it to Lanark County. This Mississippi River is a roughly 200-kilometre long waterway that starts in or near Bon Echo Provincial Park, depending which reference you believe. (I’d put my trust in the Mississippi Valley Conservation Authority, which pinpoints Mazinaw Lake in Bon Echo as the source.) It runs through several communities, including Lanark, Carleton Place, Almonte and Pakenham, before flowing into the Ottawa River just east of Arnprior.

It has a long recreational trail

In 2018, the Lanark County leg of the Ottawa Valley Recreational Trail opened, connecting Carleton Place to Almonte and Pakenham along an old CPR rail bed. The gravel-surfaced trail is open to pedestrians, cyclists, skiers and ATVs. Eventually, the trail builders hope the route will connect the region to Mattawa on the Ottawa River, and to link with the Great Trail (formerly known as the Trans-Canada Trail). 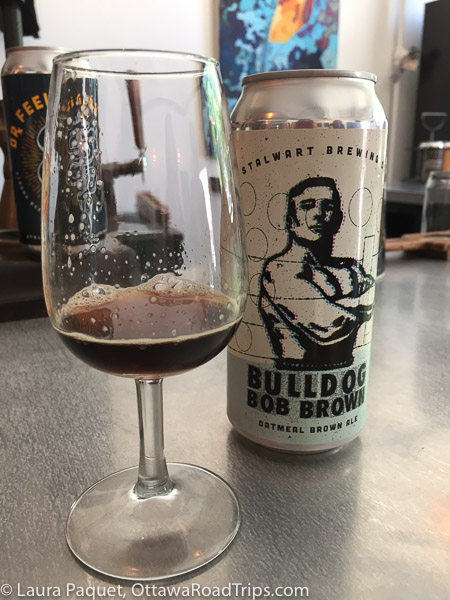 Every community worth its hipster salt has a craft brewery these days, but Stalwart Brewing Company in Carleton Place is pretty innovative. When Ottawa’s Wellington Gastropub asked them to make a grapefruit-vanilla IPA, the beer makers were bemused but gave it a shot, creating Dos Jefes. In the brewery’s bright tasting room, you can also taste a range of more traditional beers, including Taxman Blonde and Bulldog Bob Brown (an oatmeal brown ale).

OK, this connection is a little tenuous, but it’s still cool. As local author Linda Seccaspina explained in an entertaining blog post, Charles Leslie McFarlane was born in Carleton Place in 1902. He would only live there until 1910, when his family moved to Haileybury, Ontario. But after McFarlane grew up, he helped keep a roof over his family by writing 19 Hardy Boys books, under the pseudonym Franklin W. Dixon. The company that commissioned the books, the Stratemeyer Syndicate, used pseudonyms so that the books in their series (which also included the Nancy Drew and Bobbsey Twins books) could be ghostwritten by multiple authors. Oh, and the Hockey Night in Canada connection? Leslie McFarlane’s son is author and HNiC commentator Brian McFarlane.

Disclosure: I have travelled to Carleton Place several times as a guest of Lanark County Tourism, which neither reviewed nor approved this post.

Want to check out another Lanark County town? Here’s my post about great reasons to visit Perth.

If you enjoyed this post, why not subscribe to my free weekly e-newsletter? It’s packed with tips on things to see and do in Eastern Ontario, the Outaouais, West Quebec and northern New York.

Laura Byrne Paquet’s first encounter with the written word was not auspicious: her birth announcement appeared in the newspaper classifieds under the heading “Livestock for Sale.” Despite that, she became a writer. She’s written about destinations around the world for more than 80 publications, including National Geographic Traveler, Islands, Chatelaine, DreamScapes, The Globe and Mail, The Ottawa Citizen and ELLE Canada. A past president of the Travel Media Association of Canada, Laura has also written or co-authored 12 books, including Wanderlust: A Social History of Travel and Secret Ottawa.

Link to this story: https://ottawaroadtrips.com/2019/08/07/10-things-you-didnt-know-about-carleton-place-ontario/