Carleton Place has its very own castle – or at least a jewel in Ottawa Valley’s architectural crown. The Carleton Place Town Hall at 175 Bridge St. was designed in the Richardson Romanesque style by Toronto architect George King. This style is particular to North America and originated with Henry Hobson Richardson. The town hall was built for $26,000 in 1897 using limestone quarried in nearby Beckwith Township. It features slate-roofed towers and turrets, a stained-glass bay window, intricate carved details and a dramatic foyer. The bay tower was used by the town’s fire department to hang hoses to dry up until the late 1980s. The impressive council chamber is known as the Red Room, and at the top of the staircase is the stunning auditorium, with an arched pressed-tin ceiling, impressive acoustics and one of the few remaining raked stages in Canada. Sir Wilfred Laurier spoke here during the 1911 election! The exterior and parts of the interior of the Town Hall have been designated under the Ontario Heritage Act. See how history has been maintained while co-existing with a busy modern office environment. Contact 613-257-6200 for info. 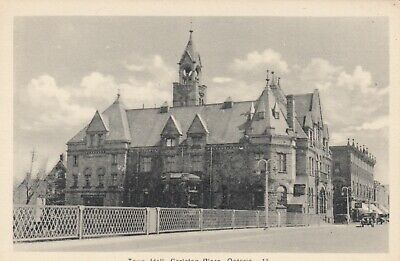